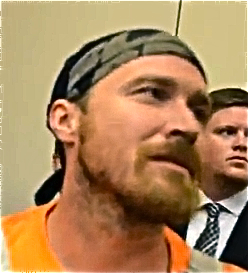 Wyatt McMinn 34 of Portland was arrested and charged with criminal trespassing.

Dateline Thursday September 12, 2013 – Portland Oregon:  The union thug who disrupted a “Right to Work” event held on the campus of Clark College in Vancouver WA last Thursday has been identified.  According to Vancouver Police, Wyatt McMinn, age 34, of Portland was put under arrest and charged with Criminal Trespassing.  As clearly seen in the video (embedded below), McMinn refused to leave the building and move to the sidewalk.  Several women in the audience are clearly frightened by McMinn and three other union perps who disrupted the event.  In accordance with Vancouver Police policy no mugshot was taken or in any case would have been released.  My screen shot will have to suffice.

Here’s an excerpt from the cascade press release which summarizes what McMinn and his buddies were up to:

After yelling, harassing, and shoving event attendees and organizers, protesters entered the venue and began shouting and using bullhorns to disrupt the event. The keynote speaker, Mackinac Center for Public Policy’s labor expert Vincent Vernuccio, was also spat on by a protester. The Vancouver Police Department was called and escorted protesters out of the event center. The two who refused to leave were arrested for trespassing. 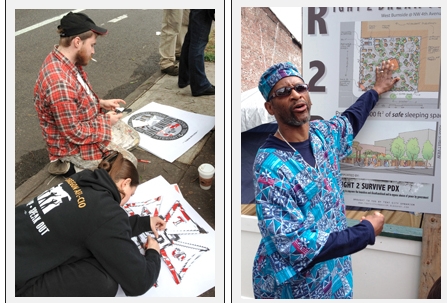 From Labor Union Pub Article: McMinn (left) helps out at Mubarak’s (right) homeless camp. Mubarak is the convicted crack dealer and accused wife abuser who was caught on tape yelling racial slurs at a downtown Portland political event. Oh yeah he also DJs at KBOO.  (screen shots used under US “Fair Use” Law)

In the end only one perp, McMinn was arrested and charged.  McMinn is Vice-President of the Painters Local 10, and you are not going to be surprised at the company he keeps.  According to an article in a northwest labor newsletter, McMinn volunteered at “Right 2 Dream Too” offering the following quote:  “Housing should be a human right for everybody.”  (as one alert reader quipped:  “He now has the right to go to jail.”)  Of course “Right to Dream Too” was founded by none other than Ibrahim Mubarak who is featured in the very same article.  Mubarak is widely known as the person caught on tape leading a group in racist slurs against blacks participating in a Portland TEA Party in 2011.  According to Willamette Week his real name is Keith Jackson and he’s a convicted crack dealer also accused by the editor of Street Roots of embezzling and dealing drugs with the camp’s funds.  His wife also called Portland police to report spousal abuse back in 2001.

“You’re under arrest.” Wyatt McMinn, 34 of Portland does the perp walk after refusing to leave the event. McMinn is (or was) the Vice President of IUPAT Local 10 out on Northeast Sandy Boulevard in Portland Oregon (photo cred Google Maps).

According to at least one source McMinn might be up for some hefty fines and could very well do time:

One can only hope.