Dateline September 16, 2013 – Portland, Oregon:  Remember how President Obama promised that “If you like your existing health plan you can keep it?”  Apparently that is not so.  Thousands of Oregonians are receiving what is effectively cancellations via voicemail.  This video contains screenshots of “Cover Oregon” (COVEROREGON.COM), Oregon’s Obamacare which current participants are being forced to join as of January 1, 2014.  In the background plays the robocall left as a voicemail received by one participant which warns them to watch for “a very important letter in the mail.”  The letter received which is captured with a photo cancels their policy effective January 1, 2014.  The voicemail finishes:  “Thank you for your time.”

Here’s the Transcript:  “Hi!  I’m from the Oregon Health Authority.  I wanted to let you know that in the next few days you will be receiving a very important letter in the mail.  This letter will explain upcoming changes to the Oregon Healthcare System.  That start in 2014.  Remember:  keep an eye out for this letter and then take the necessary steps to apply for health insurance coverage that will start in 2014.  Thank you for your time.” 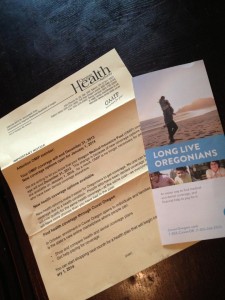 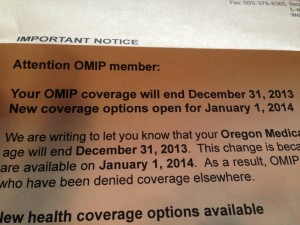