Dateline Tuesday July 20, 2013 – Portland Oregon, Dan Sandini:  A  well funded Leftist environmental group with millions of dollars in yearly income has been tied to this weekend’s Leftist yachting fiasco in Portland/Vancouver.  The organization 350.ORG, the event’s sponsor, received over 5 Million dollars in funds in 2009 alone, and has well established ties to the Rockefellers and Clintons.

Over the weekend I videotaped an environmentalist event “NW Says NO to fossil fuel export,” held out at the Vancouver Landing, on the Columbia River, and out on the Interstate Bridge.  During the event I managed to tape three yachts being loaded with catered food, and the dichotomy with the austere image of the grisly seasoned NW environmental extremist was striking to me.  So I uploaded the video to my YouTube Channel Daylight Disinfectant, just excepts, not all of it.  If you haven’t watched the video or skimmed the article please do so here. 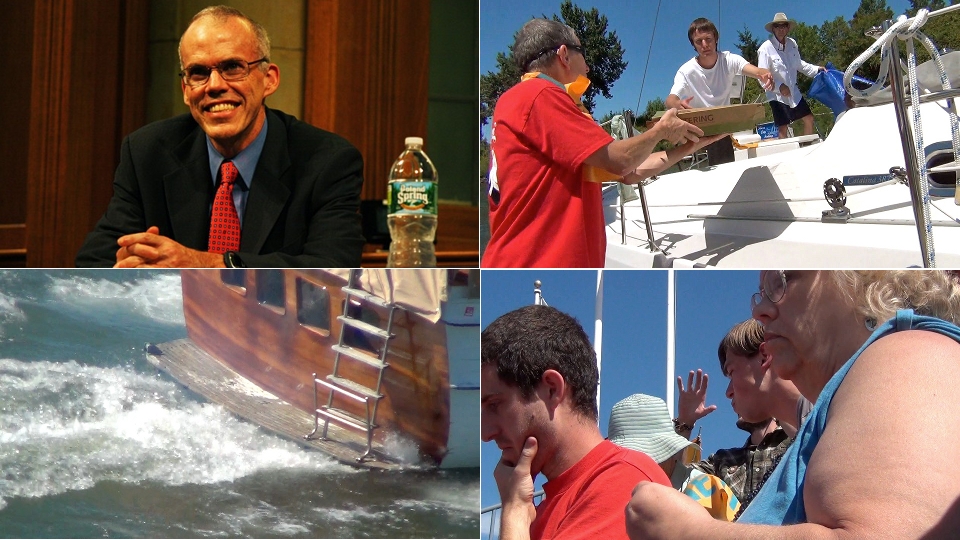 TL:  McGibben’s $5M/yr Rockefeller funded 350.org has ties to the Clintons  TR:  “Do You have a veggie platter yet?”  Thurston Howell lookalikes load catered food onto $399/hr yachts at Vancouver Landing. BL:  Diesel fumes erupt from one of their vessels on the Columbia BR:  Some of the less well heeled at the event talked of social justice and worried about losing their subsidized housing.

Since then other NW Citizen journalists like Katheen Worman and Lew Waters have been shooting me private messages with leads, and  local conservative media icons like Jayne Caroll, Victoria Taft , Lars Larson and Bill Post invited me to dig a little deeper, even though serious investigative journalism is clearly not my bailiwick.   Emails to some of the more serious local writers like Nigel Jacquiss at Willy Week have gone unanswered.  So God helps those who help themselves, and in the process I uncovered something which to me is startling.  Call me naive, having lived out here for 6 years and been been videotaping since 2009.

350.ORG is what can only be described as a financial socialist behemoth.  Well funded by the Rockefleller foundation, one investigation of of their Form 990s found that they received over 5 Million dollars in 2009 alone.  Of course that was 4 years ago.  The President and co-founder of the organization Bill McKibben was in the area 10 days before this weekend’s event to give a lead up speech and fundraiser.  McKibben is also on the Board of Directors, and is the scholar in residence out at Middlebury college in Vermont.  350.ORG’s web site lists over 50 staffers which include an African Coordinator, and a European Coordinator on site in Paris France.  This is what Bill McGibben describes as his “scruffy little outfit.”  [source climatesofcanada.org]

An example of what two prominent environmental groups, 1Sky and 350.org, receive from the Rockefeller foundations alone:

Step it Up and 350.org (Sustainable Markets Foundation)

The cost of just one of the yachts used this weekend, the 50 foot Gallant costs $399/hour to rent.  One of the other two vessels, a more modest 39 foot Catalina 387 was  a relative bargain at $150/hours to rent, and the third was approximately the same size.   So all told for an 8 hour day, I estimate the cost at around $5600 just for the yacht rental.  Of course this does not include the cost of catering delivered by taxicab or the 15% surcharge the ships owner and captain Shane St. Clair,  charge for a self-cater event.  It was a Portland downtown cab by the way, delivering to Vancouver.

While we don’t know if “Summer Heat,”  a 350.ORG organization footed the bill, we are trying “connect the dots” and “do the math” as Bill McGibben is fond of saying about “Big Coal.”  We also can’t help but note the contrast between “the Little People” onshore, some of whom were worried about losing their subsidized housing, and the “John Kerry/Thurston Powell III” lookalikes who ventured topside to pass around the “veggie platters.”  Perhaps “Summer Heat,”  “Portland Rising Tide” or 350.ORG can enlighten us.  More to follow.