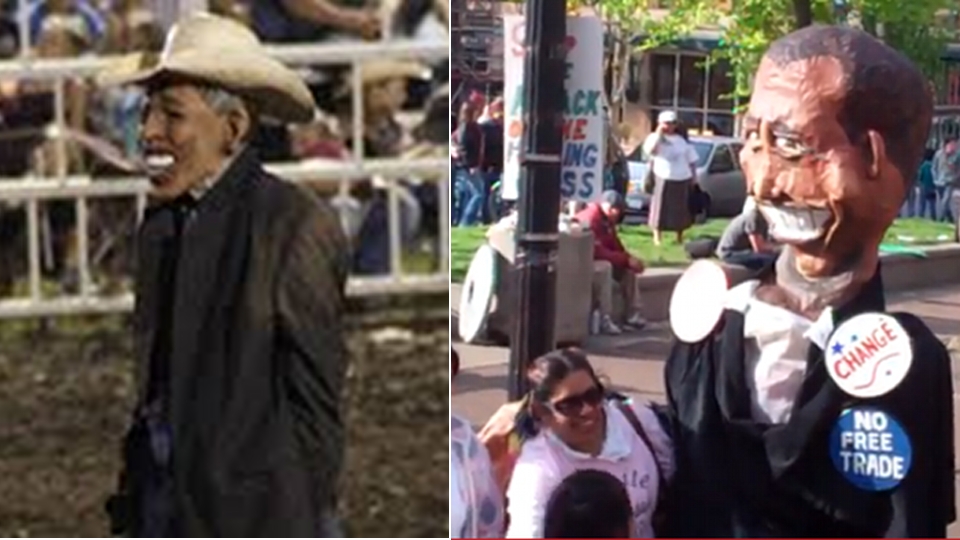 (Left:)  An Obama rodeo clown has been the subject of a veritable inquisition resulting in resignations and calls for federal investigations while (Right:) the Left engaged in similar activities at a May Day celebration in Portland Oregon back in 2011.

UPDATE!  Obama is dancing to the music of local rap artist and school teacher  Mic Crenshaw who’s lyrics include:  “We Gotta Get Past Capital and Private Property,” “Like a shank to the pancreas,” “occupy property and block the streets,” and “wage labor is slavery.” (H/T LaL)

(please hat tip Dan Sandini at Daylight Disinfectant) Dateline Tuesday August 13, 2013; Portland, Oregon:  As the persecution by the Left of a rodeo clown who wore a mask of President Obama continues,  yet more Portland footage has arisen of the Left engaging in very similar activity.  On Tuesday, The Drudge Report was again ablaze with spectacular headlines which had clowns being ordered into “sensitivity training,

‘the announcer and rodeo president resigning as the NAACP called for a Secret Service investigation.  (No this is not “The Onion.”)

Meanwhile back in Portland Oregon on May 1 2011, the left aparently created their own unflattering rendition of the President.  It included an oversized masked head, ill-fitting clothes, huge feet and exaggerated facial features.  YouTuber Lexyflyingfish uploaded the video on May 1 12011, and it’s gleaned barely 200 views and not a notice or complaint.  There were no comments on the video as of 7:40 PM Pacific time.

Event organizers  included a fake Secret Service Agent to guard the gargantuan parody of the Pres, and had smiling and joking celebrators taking advantage of the photo op.  At one point one of the celebrators actually takes a peek inside the Presidents jacket.  These revelations follow on the footsteps of the revelation here Monday morning of the Left using a mask of President Obama in an environmentalist stunt which could have put lives in danger.