BREAKING NEWS!  Dateline Friday, May 16, 2014 – Portland, Oregon:  In a shocking discovery, Portland State University paid approximately $20K for an anarchist’s conference which featured self-described domestic terrorists brought in from out of state, and a seminar on “White Privilege.”  The “5th Annual Law & Disorder Conference,” was held at the Smith Memorial Building” on campus May 9-11. 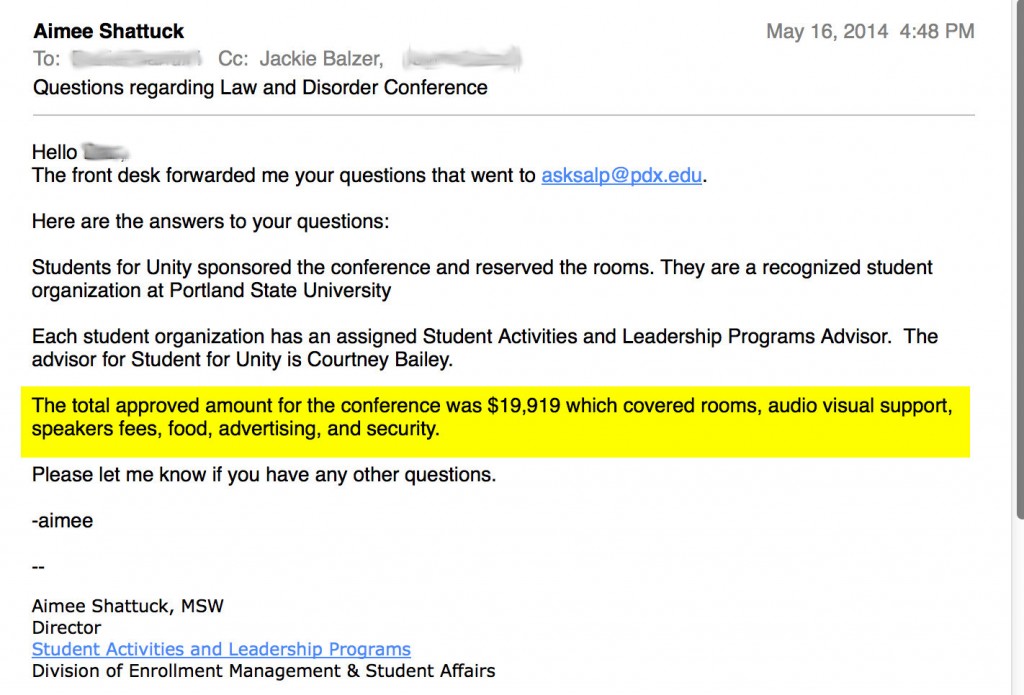 The Conference was reported on by Citizen Journalists Laughing at Liberals and Daylight Disinfectant.  One of the videos depicting foul language, incivility and downright chaos among students has gone viral for L@L, receiving well over 100K views in just 5 days.  The video was featured in TIME and leaves egg squarely in the face of the university organizers who have yet to release a public statement on what transpired.  According to YouTube Channel Laughing at Liberals:

“Anarcho-Syndicalists protest/get protested at their own conference. A panelist by the name of Kristian Williams was scheduled to speak at the annual Law & Disorder conference, but was thwarted by a protest. No one could actually articulate what their issue is with Mr. Williams. Campus police were eventually called in as the panelists fled.”

My first email to the Student Activity and Leadership Program (SALP) to determine the cost of the conference was blown off.  A follow up email to Jackie Balzer, the Provost for Student Affairs brought swift results.  According to SALP Director Aimee Shattuck, a total of $19,919 was approved by University management to fund the free-for-all.  This included:  rooms, audio visual support, speakers fees, food, advertising, and security.

These speakers included out-of-stater Scott Crow, a self described domestic terrorist who kept company with those who plotted to bomb the Republican National Convention.  According to Crow, he made Homeland Security, CIA and NSA watch lists.  See a very LONG yet interesting speech by him here, where he calls Breitbart favorite Brandon Darby a “traitor.”  Darby brought information to the attention of the FBI to help foil the plot.  Friends of Crow are serving lengthy jail sentences thanks to Darby’s testimony.  In the video Scott rambles on about Lisa Fithian and there’s applause from the audience when Crow brands himself a terrorist, and talks about an attempt to burn down the Governor’s Mansion.

In another section of the conference,  Jared Rheah provides a lecture titled: “Zombies and the White Savior Complex.” It was delivered in a campus classroom to a small, yet receptive audience.  The entire video must be seen to be believed, but some excerpts are particularly incredible. For example near the end Rhea explains:

“Whiteness isn’t skin color … skin color is a marker of whiteness that can signify to others, this person may be white … I act white, and by acting white, I prove to everybody else that I’m white, and that at that point the privileges that are associated with whiteness are ones that I take on.”

All this subsidized by the taxpayers.  More as this story develops.