“Getting to the root of it”: Emmalynn Lorraine Garrett has lost her bid to have YouTube remove the video of her arrest. [police photo from July 2011 arrest.]

DATELINE PORTLAND OREGON – FEBRUARY 6, 2013:  Daylightdisinfectentant has won a battle to keep one of the Channel’s most popular videos up after a highly visible Occupier tried to have it taken down.  In the video “Occu-Mob Goes Berserk!,” Occupy Portland is caught on tape breaking storefront windows, vandalizing cars, upending trash cans and invoking terror in a Southeast Portland neighborhood.  It was filmed about a year ago.  Emmalyn Lorraine Garrett, a “Public Relations Team Member” for Occupy Portland, filed a privacy complaint with YouTube to have the video removed.  Occupy endorsed violent Black bloc tactics in the event announcements.  The video is one which caught the attention of Conservative Media icon Andrew Breitbart for inclusion in his highly successful documentary Occupy Unmasked.

Garrett filed online to have the video removed after she was caught on tape being arrested during the night of terror.  Shortly after the video was taken, Garrett was carted off to jail and charged with both Disorderly Conduct in the Second Degree and Interfering with a Police Officer.  Her arrest is clearly shown in the video.

On the night of the violent free-for-all, Garrett provided her name twice on a public street, and even spelled it out.  She then provided her version of the circumstances of her arrest.  Here’s the transcript:

Shortly after this Garrett was tossed into the back of the paddy wagon and carted off to jail.  She’s was accompanied by another high profile Occupier Nefi Martinez-Bravo.  After the van is closed up, one can clearly hear the sounds of the perps repeatedly and violently kicking the insides of the van. 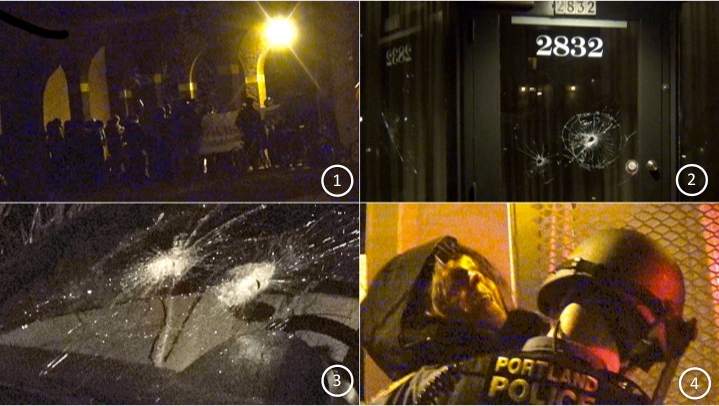 RUN-INS WITH THE LAW

Garrett is no stranger to law enforcement.  While we don’t have information on actual convictions, we do have information of her arrests courtesy of the mainstream media and police press releases.  Links are provided.

And while not an arrest this incident fits in well within the pattern.

This last event definitively links Garrett with Earth First which is an eco-terrorism organization associated with the dangerous practice of tree spiking.  According to Wikipedia:

“Tree spiking is a common tactic that was first used by members of
EarthFirst! in 1984. Tree spiking involves hammering a small spike into the trunk of a tree that may be logged with the intention of damaging the chainsaw or mill blades and may seriously injure the logger.”

Both Daylight Disinfectant and the blog 5440fight.com received emails from someone purporting to be Garrett trying to get the video taken down and threatening legal action.

“Remove my name and likeness from ‘Occumob Goes Berzerk’ video.  Use of my full legal name and likeness constitutes a Violation of Privacy by YouTube standards… If you do not, I will pursue this further with the YouTube complaint process and if needed legal action.”

YouTube’s policy takes into account whether a video is newsworthy and whether it is in the public interest to keep it up.  This undoubtedly factored into their decision not to take it down.  [In defense of our First Amendment Rights, we do not respond well to paper tiger threats and have no intention of ever taking it down.]

In addition to the eco-terrorism association, Garrett is a part of Occupy which, despite the sugar coating by the mainstream media, was and remains a violent movement.  Supported by unions and Fat-Cat Liberals like Michael Moore, they are responsible at last count for 4000 arrests including violent assaults and rapes which they attempted to cover up.  Occupy cost cites across the US well over $13 Million.  Their activities are documented on our YouTube channel DaylightDisinfectant which now has well in excess of a half million views, and in the documentary “Occupy Unmasked” now available on Netflix and amazon Prime.   We tried to contact Ms. Garrett for this story but she did not return our messages and requests to contact us by phone.

12 thoughts on “OCCU-LOSER: OCCUPIER FAILS IN BID TO HAVE VIDEO TAKEN DOWN”