Dateline January 23, 2013 – Portland Oregon –  Radio talk show phenomenon Glenn Beck announced on his nationally syndicated talk show today that he will be interviewing and advocating for a blind gun owner on his program tomorrow. Wonder if Beck knows that we in Oregon have our own visually-impaired Second Amendment advocate.  Joseph Carter, was introduced as “The Blind Gunner” by event organizer Tom Tharp at the “Guns Across America Rally” held at the Oregon State Capitol Building at High Noon this past Saturday. 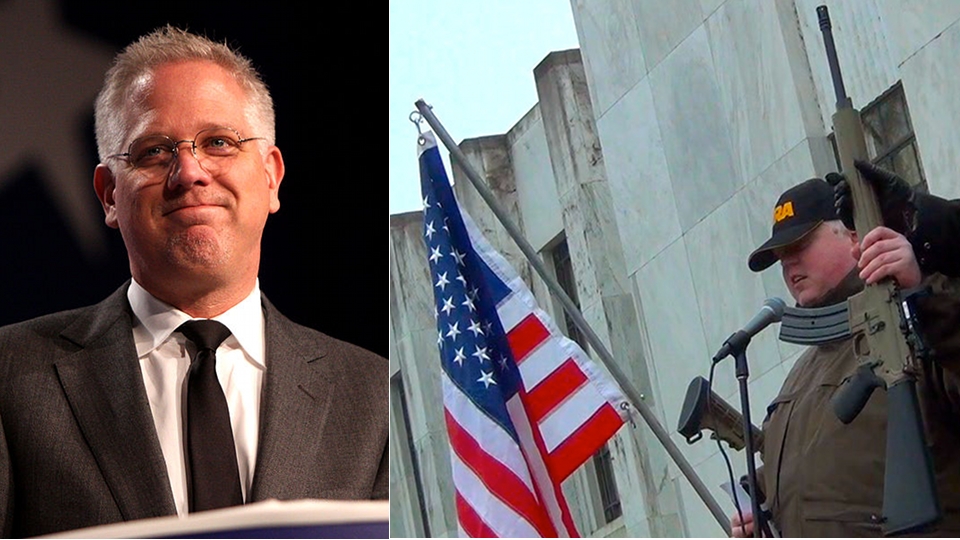 Left: Glenn Beck will advocate for blind gun ownership on tomorrow’s program. – Right: Joseph Carter: “Wonder if I can actually hit anything with it? … Break into my house and find out!” [photo cred. Beck expedia]

Wearing an NRA cap and raising high an “M4 Tactical Assault Hammer” as well as what appeared to be a real AR-15, Carter gave a 12-minute speech which included statistics on gun violence, as well as kitchen knives (what Carter called, the Tactical Cuisinart).  The full speech is embedded below from YouTube Channel DaylightDisinfectant. [Apologies for the wandering camera lens the photographer was trying to grab stills of other participants.  The audio is complete and intact.]

Carter claims that both he and his girlfriend have been the targets of repeated threats because of  his strong proponency for the Second Amendment.  He is a concealed carry permit holder, and during the speech produced both his permit and piece; as well as an ID card purportedly showing him to be legally blind.  As he produced  his concealed weapon, quipped Carter:  “Wonder if  I can actually  hit anything with it? … Break into my house and find out!”

The Glenn Beck radio program can be heard on FM News 101 KXL tomorrow morning 9-12 .  We’ll be forwarding this story through Beck’s tip channel at TheBlaze.com and hopefully he will reach out to Mr. Carter.  We’ll also tip Lars Larson regarding Beck’s Program Agenda for tomorrow.  Perhaps he’ll agree to have Carter on.  His show follow’s Beck’s on KXL.