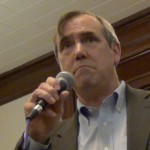 Dateline Tuesday, January 2014 – Portland, Oregon:  On Friday I attended a Senator Jeff Merkley Town Hall in Multnomah County to take some videos and report back via my blog and YouTube channel.  One of the questions asked was about global warming from a clearly frightened NE Portlander, Judy Perry, who was in fear for the lives of her children.  Merkley did nothing but stoke her fears.  The video is embedded below. 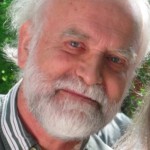 I sent the video off to PHd in Physics Climatology Expert Gordon Fulks who surprised me by going through the whole video word by word and taking apart Merkley’s response.  After reading it one comes away with the opinion:  “how could you ever vote for this guy?”  Here’s Dr. Fulks’ analysis reprinted in it’s entirety:

This is typical hysteria from Senator Merkley. He uses the now familiar arguments that have no validity in establishing a link between man-made carbon dioxide and the various phenomena he mentions.Merkley offers NO arguments supporting his contention that man-made CO2 causes catastrophic warming, probably because he believes it is self-evident. He cannot see how inconsistent this is with most scientific arguments on both sides of this issue that point to the enormous complexity of the climate system. That’s the rationale for the billion dollar climate models that fail so spectacularly. Alarmists cannot have it both ways: self-evident and extremely complex. The reality is of course closer to extremely complex.

Are Merkley’s bark beetle infestations, catastrophic forest fires, droughts, and alleged declining mountain snow related to an alleged warming in the Pacific Northwest? NO! As with all the fables that the scientifically illiterate weave about Global Warming, there is a shred of truth to some allegations but no truth to the inferences they draw from them.

The most obvious nonsense from Merkley is the allegation that our Pacific Northwest climate has warmed in recent decades. It has in fact cooled for the several decades where he alleges ill effects from warming. We are now back to the average annual temperatures typical of the early 1900s. This alone negates everything he said.

Other nonsense from Merkley:

1) Bark beetle infestations are not significantly affected by warmer or colder winters.
2) Catastrophic forest fires have much more to do with poor forest management than with summer droughts. Summer droughts are the norm around here.
3) Severe Droughts in the Pacific Northwest, like warm periods, follow cyclical patterns related to ocean cycles. Our least annual precipitation in the historical record occurred in 1929, with several other dry years through the Dust Bowl up to 1953. Over the last ten years, we have been very close to normal.
4) Mountain snow pack did decline on average from the high about 1950 but has since recovered.
5) Oysters probably do not like “carbolic acid” (phenol) but that is not what you get when CO2 dissolves in water. Merkley needs to get the terminology correct!
6) Alleged ‘ocean acidification’ is also largely nonsense. Any minute changes in ocean pH from carbon dioxide are far less than changes from natural causes.

In short, Merkley needs to learn something about Global Warming before displaying profound ignorance.