Men, white people, people who look *marginally* White, heterosexual, wealthy people, higher class, … Arian looking people: all of these are people with special privileges according to the students of PSU.

Dateline Sunday February 2015 – Portland, Oregon: The Northwest Regional Animal Liberation Forum held it’s 7th Annual Forum this weekend at Portland State University (PSU). I arrived late, grabbed a seat in the back, and rolled tape. I watched Portland Community College (PCC) Professor, Lisa George deliver the “Anti-Oppression Training.” It began with a cow asking the question: “”Who has more social power than you?” [No I am not making that up.] The answers make for some hilarious sound bites. 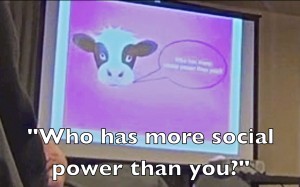 The Cow Asks: “Whop has more social power than you?”

One loony looking woman comes up with:

“We figured out that, if we could bottle inspiration, right? If we could attach it to some smell that everyone likes, and then just give it out whenever needed, that we would all recognize that same smell and be inspired by it.”

Is she off her meds? You decide. Although a few in the audience chuckle it’s pretty obvious that she is serious. The usual laundry list of human offenses follows: Men, white people, heterosexual, wealthy people, higher class, … Arian looking people, people who look *marginally* White: all of these are people with special privileges according to the students of PSU.

But hang in there for the end. It’s like something out of a “12-Step Program. A participant resembling Pajama Boy apologizes for being a “white cis-gender man,” and confesses to his white privilege:

“I personally have a, quote, unquote, boss positional at my job and I feel like I am constantly having, and I’m a white cis-gender man … and I’m not perfect. And I need to constantly remind myself that I need to be, like, I don’t know everything, and I constantly need to keep myself in check and be always open to criticism because my privilege is so ingrained in my mind.”