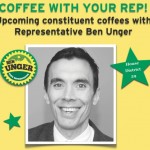 Dateline Portland Oregon February 23, 2013:  Democratic State Representative Ben Unger offers no support for the latest effort by Democratic Senator Ginny Burdick to grab guns from law abiding Oregonians.  Unger made this clear at an informal “COFFEE WITH YOUR REP!” event held at BJ’s Coffee in Forest Grove Oregon.  HB3200 co-sponsored by a number of State Reps and Senators, including Burdick, would effectively ban all modern firearms and allow for warrantless searches of your home to enforce it.   (Yes you read that correctly.)  Unger has obviously been bombarded by emails on the topic as he tried to wade through the mess on his iPhone.  He goes on to give his position on multiple round magazines, universal background checks, and a number of other gun related issues.