Senator Ginny Burdick wants to “separate people who are in crisis from their guns *** real fast ***.

Dateline Monday February 1, 2016 – Portland, Oregon: Local folks in Oregon know that “Public Enemy Number One” when it comes to their guns is Ginny Burdick. But this session she seems to have come absolutely unglued and hell bent on establishing a process by which people can be separated from their guns. While she does say at some points she is talking about people who are suicidal, she also is careful to say that any “crisis” in your life will be cause to have your guns taken away “real fast!” Am I the only one hearing the relish in her voice when she says: “Real fast?” Her short gun speech is transcribed below. Let her know what you think at the contact information provided. 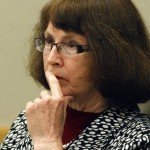 Burdick: “This is a 35 day session, so there the ah, the, the, the initiatives that we’re able to do are by definition limited. Ah … Representative Williamson has hit the sweet spot. With her Bill to close the ‘Charleston Loophole.’ I think that’s doable. But you should also know that there are other things going on.

You did, I’m sure you all heard the other Bill introduced in the Senate by Senator Prozanski. I actually have a similar bill that I am working on that I decided not to introduce at this time because it, the, the whole issue of guns is so volatile. And I’ve actually got ah, a bipartisan group set up who’s interested in working very seriously on the issue of not just mental health but crisis … ah … crisis situations where guns are involved and as Representative Williamson said it’s primarily suicide. So California has passed legislation in their last session … ah, Assembly Bill 1014, that basically has a process with, with, protections in it for Peoples Rights but a process to separate people who are in crisis from their guns *** real fast *** ” and that, that’s what’s really necessary ya need to … [trails off] …

Sometimes when people are in crisis they’ll rush out and buy a gun. I talked to a gun dealer years ago when I was working on the background checks at gun shows who had the traumatic experience of selling somebody a gun and having them go out on the sidewalk and kill themselves.

So this is a legitimate discussion it needs to be had and it also needs to be had within the context of people who already have guns, and are in crisis, um. I’m sure in my family this has happened before, I’m sure in other families this has happened before when someone is suicidal or a danger to someone else you’ve gotta separate them from their guns, but it’s very *tricky*. You need to put a lot of deliberation into it. But I want you to know I’m working on it, and ah I also want you to know how much I appreciate your support. My District has my back on this.”