UPDATE (October 15 2011):  Oregon Catalyst is reporting that Portland-area public schools are giving class credit for participating in illegal Occupy PDX Event.  “He repeated several times that if the students could prove they went to the rally he would gladly give them extra credit. Throughout his whole speech he made quips attacking both Republicans and Conservatives, blaming everything on them.”

On the day that Chicago taxpayers are asking “were taxpayer funds misappropriated in support of Occupy Chicago?,” the same question is being asked here in Portland Oregon.  A Portland-area public school field trip was caught on tape bringing students through the unlawful protest.  Adult chaperones of the trip appear to to be voicing their support for the protestors.  A local videographer/citizen journalist “LaughingAtLiberals,” caught the field trip on tape and uploaded it to YouTube. 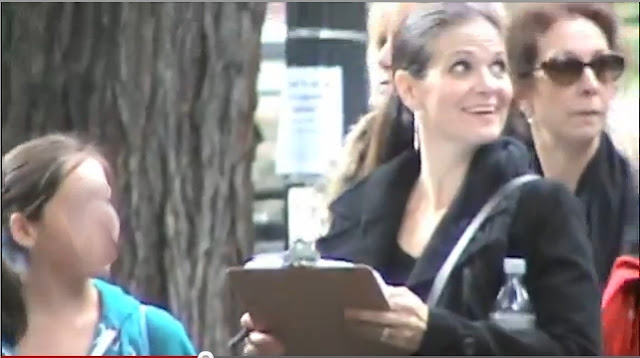 Above:  Caught on tape:  a Waluga Junior High School Field Trip Chaperone and student (blurred for security) take in Occupy PDX.  The event includes widespread drug use and at least one possible sexual assault which allegedly occurred in the criminal encampment.

In Chicago, the Chicago Teachers Union (CTU) bussed in a public high school band to participate in their Columbus day protest against the Mortgage Bankers Association.  According to Breitbart.com:  “Even though the demonstration occurred on Columbus Day, a public holiday, the participation of the marching band may have violated Chicago Public School policy, which prevents the misappropriation of school board property in “prohibited political activity for the benefit of any campaign for elective office or any political organization.” “Prohibited political activity” is defined as “[p]reparing for, organizing, or participating in any political meeting, political rally, political demonstration, or other political event.”

Back in Portland, the school field trip from Lake Oswego School District was brought down to the protest with what appeared to be school teachers toting clipboards and smiling widely.  Representatives of Waluga Junior High School can be seen bringing the kids down for a tour of the event.  The comments under the video which has over 1000 views and received national attention read:  “October 11th, 2011, Portland, Oregon. Teachers from Waluga Junior High School in Lake Oswego, Oregon, take their students on a field trip to “see how the people come together” at Occupy Portland.”  In the video the videographer asks:  “… If it was intentionally showing the kids how people come together …”  The representatives respond:  “It’s a part of it … it’s all a part of it ..”

The protests have been widely embraced on a National level by the Democratic Party, and welcomed into the City of Portland by Liberal/Progressive Mayor Sam Adams.  Sponsorship by Unions such as SEIU and and wealthy political operative/investor George Soros are well documented.  Organizations such as the International Socialists Organization (ISO) have been videoed giving classes on Communism at the Occupy PDX event.  The protests have been widely condemned by Republicans such as candidate for President Herman Cain.

0RS260.432, also known as Oregon’s “Little Hatch Act,” generally states that a public employee may not, while on the job during working hours, promote or oppose election petitions, candidates, political committee or ballot measures.  Additionally, no person (including elected officials) may threaten or coerce a public employee into doing so.  The line between protected and prohibited political activity can be difficult to draw and since there could be both political and financial consequences to violating these laws, the State advises caution.

Portland Public Schools are no strangers to the violation of State Election Laws.  As near back as this summer Oregon Public School officials were accused of violations.  According to Oregonlive.com:  “Eight employees of Portland Public Schools, including Superintendent Carole Smith and the district’s top lawyer, broke state election laws by using the public office to sway voters to vote for a huge school construction bond earlier this year, a state investigator concluded.  The officials all had a hand in writing, editing or approving fliers, emails and web site postings that the state concluded were biased in favor of the $548 million bond or which omitted the bond’s likely full costs to taxpayers.” Could the field trip explode into a similar scandal?  That remains to be seen.

While this may be a one time event, the use of taxpayer resources for such trips is still of significant financial concern.  According to BUSRATES.COM the national average price for a one day rental of a school bus is $553. According to teachersalaryinfo.com the average teacher’s salary for the State of Oregon is $48,720 plus benefits.

The use of Public Schools to promote Liberal political candidates and Progressivism by the Bus Project has raised eyebrows in the past.  In at least one instance, a student was given class credit for participating in a Bus Project weekend session which began on Public School property and ended with the student “door belling for Democrats.”  Now candiate for mayor Representative Jefferson Smith is the founder of Portland’s controversial “Bus Project.”

Aside from the legal concerns, parents expressed outrage given the nature of the activities which have been documented.  One Local Citizen Journalist easily photographed illegal drug use at the event.

Additional concerns were documented in a press release by the Oregon TEA Party.  On Tuesday, Oregon Tea Party PAC Chairman John Kuzmanich reacted, “Despite having reports of crimes committed by members of this protest (including vandalized businesses, graffiti on a police cruiser and a possible sexual assault in the criminal encampment), Portland police are allowing it to continue. This is in direct contrast to the peaceful Tea Party event of April 15, 2010, that was broken up by Portland Police for no reason. I suppose we shouldn’t be surprised, however, given that the SAME racist, homophobic criminal element disrupted the April 15, 2011 Tea Party event, with a planned orgy of lawlessness and the apparent approval of the Mayor.”  So the question remains is this the type of event that taxpayer dollars should be used to bring our kids too?

Telephone calls to Waluga Junior High School Principal Jenifer Schiele for comment on this article were not immediately returned.