[VIDEO] Dateline March 15. 2013:  It was an evening of relatively well-behaved mayhem in downtown Portland as violent anarchists took to the streets for the International Day of Action Against Police Brutality.  Bad language, taunting police, walking in the streets, blocking traffic, and scuffles with cops on bike’s were about the worst of it.  An army of police confronted the angry mob maintaining order, and acting by all accounts extremely professionally.  The disgraceful vagabonds began at Halladay Park in NE Portland and marched a few miles across the Willamette, down Burnside and up Broadway to SW Portland.  Some protestors complained of being tired, as many in the crowd had difficulty keeping up.

Wading into the mess to denounce police violence was Portland’s fearless Mayor Charlie Hales.  Hales engages with one of the protestors wearing a mask who claims Hales had been laughing at them.  After this the Mayor makes a hasty departure to ungentlemanly jeers of F- You from the uncivilized thugs.  Not a bad idea given this is the same gang of thieves that wreaked havoc on SE Portland on February 7, 2012, breaking store front windows of area businesses and vandalizing automobiles. 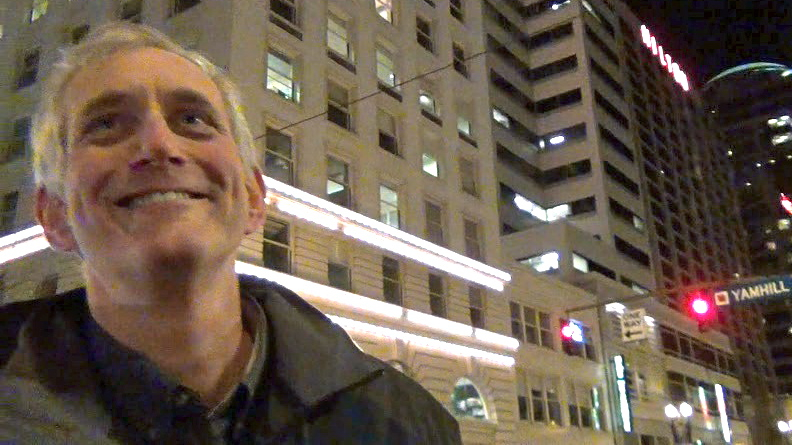 The Mayor shows a lot of class and doesn’t let the profanity phase him a bit.  “When somebody says you agree you usually smile,”  he quips.  A block away, just across from world famous Pioneer Courthouse Square, the “Silent Cal” of Portland Politics grants Daylight Disinfectant a quick exclusive interview before being hustled into a waiting SUV.  To quote Hales:  “You know .. it’s the First Amendment and I like that, and the Police Department showed restraint and I like that too.”  Right with ya Mr. Mayor.