DATELINE TUESDAY OCTOBER 8, 2013 – PORTLAND:  Just when you thought it couldn’t get any weirder:  Oregon’s Deputy Superintendent of Schools, who works directly for Governor John Kitzhaber has gone on the record as wanting control of your kid’s minds while they’re still in the womb. 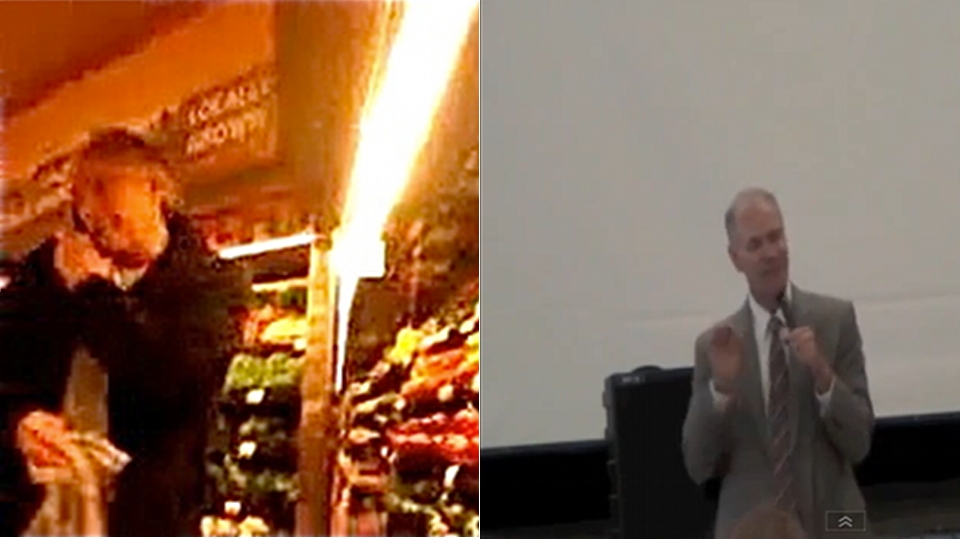 LEFT:  Gov/Superintendent of Schools Kitzhaber chats on the phone with long-time “shack-up honey” Cynthia Hayes.  RIGHT:  Saxton -“We should be thinking about education from the time that a woman … um … enters … um … is pregnant [sic], so prenatal, and just like:  what their nutrition looks like, what their exercise looks like …” #creepykitz

Anonymous Oregon YouTuber “Don’t Tread On Farms” produced a video of the Kitz’s righthand man on schools Rob Saxton promoting the “P20” program at a PTA meeting.  No the “P” doesn’t stand for Portland:  it stands for prenatal!  The video of the speech even starts creepy with Saxton doing a little mind control himself with his singsongy “Good Afternoon” which he repeats until he gets the response he wants from the crowd.  (#awkward)  It’s reminiscent of something you might see in an old black and white Nazi War film, with a Mengele or Goebels at the front of the room.  I’m betting you can’t watch the beginning without squirming.

“One of the things we have begun putting in place is the P20 System, and “P” stands for prenatal, and “20” stands for graduate school.  So we’re trying to think about this system of education no longer  as these pieces of a system, right like prenatal and very early childhood, um … 3 to 4 years old … kindergarden through grade 5 … grade 6 through 8th … grades 9 through 12 … and then community college or college, and then graduate graduate school … We should be thinking about education from the time that a woman … um … enters … um … is pregnant [sic], so prenatal, and just like:  what their nutrition looks like, what their exercise looks like, what kind of education we can provide working around the child …”

The Examiner’s Ann Miller has picked up on the anonymous  YouTuber’s video and written an excellent article drawing the lines between YouTuber “Farm”, and Robert Small.  Small is the concerned parent who was arrested for daring to stand up and ask questions during a recent Common Core information session.  One things for certain, the Government has taken over your heath care, in many states your personal defense, you food supply, and now wants to get into the minds of your children before they are born.  Like an Ayn Rand novel playing out in real-time.  #creepykitz

7 thoughts on “#CREEPYKITZ: OREGON GOVERNOR WANTS YOUR KIDS WHILE THEY’RE STILL IN THE WOMB”