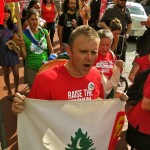 Dateline Wednesday May 21, 2014 – Portland, Oregon:  A short postmortem.  There was a smashing victory for freedom last night as Nick Caleb’s Marxism Campaign went down in a big heaping ball of red flames.  At last count Caleb received a whopping 17% of voter’s support to have workers rise up to overtake the means of production at local Portland businesses.  (I wish I was making that up.)  Voters are also seeing this as a huge “hell no” to 15NOW.ORG’s campaign to extort local firms into bankruptcy by demanding they pay a $15/hour minimum wage.  Caleb’s campaign brought in Seattle’s Communist Kshama Sawant to help tap into SE Portland’s back pockets.  Looks like the people who manufacture signs don’t take food stamps eh Nick?  Back to work at that evil Capitalist job I guess.

[above] Nick Caleb advocates Marxist ideology including workers rising up at a local company. Ironically, after complaining about his own low wages, he’s later filmed writing a $700 check to another socialist candidate.

[above, long video] Seattle  Communist Kshama Sawant was dragged in to pump up Portland’s East Bank rabble to provide funds for Caleb’s Campaign.  No word on whether the Oregon Trail cards thrown into the kitty were of any help

[above]Hard to say whether the brownies Caleb was eating on May Day had any effect on his campaign.

One thought on “BUH BYE”